A challenge to Alpine climbers 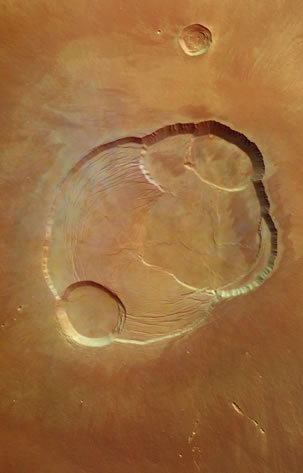 I could spend days staring at the extraordinary photos coming from the Mars Express. Olympus Mons is three times the height of Mt Everest and at its summit the caldera (above) is up to 3km deep.

Via John Robb, this observation from Philip Bobbitt, author of The Shield of Achilles: “Terrorism tracks the constitutional order it attacks. National liberation movements tracked the 20th century nation-state. Movements like al Qaeda (networked, outsourcing, providing infrastructure but not much else, decentralized) track the 21st century market state.”

The New York Times’s mea culpa for its pre-war coverage of the Iraq crisis shows once again a particularly admirable side of the best of American journalism.

“We have found a number of instances of coverage that was not as rigorous as it should have been. In some cases, information that was controversial then, and seems questionable now, was insufficiently qualified or allowed to stand unchallenged. Looking back, we wish we had been more aggressive in re-examining the claims as new evidence emerged  or failed to emerge.”

The Times does, of course, take itself immensely seriously. There’s little of the inventiveness and fun that the better British newspapers display. But British papers are worryingly loath to admit to their own errors.

An excellent piece by Toby Moore in the Financial Times Magazine (subscribers only) dissected the problem. It isn’t only The Mirror’s faked Iraq photos, according to Moore. He lists a number of incidents in The Daily Mail and The Daily Telegraph where fabrications were uncovered and then swept under the carpet.

Honesty and openness is a far better policy if papers want to retain any of their readers’ trust.