On the slopes next week 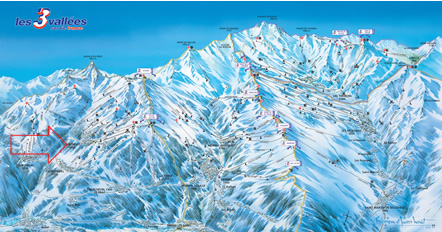 I’ll be on the slopes next week, about where I’ve drawn an arrow, far away from my computer and my weblog. No posting, of course.

L2: the return of the Lomborgs

Bjorn Lomborg, who put every environmentalist nose out of joint with his statistical sleight of hand The Skeptical Environmentalist is now taking on foreign aid.

According to the Financial Times, “He has invited a group of leading economists, including four Nobel prizewinners, to come up with a ranking of the most effective ways of spending aid in an exercise dubbed the ‘Copenhagen Consensus’. The aim of the project, which will look at subjects such as education, communicable diseases, conflicts and climate change, is to promote debate about what the main priorities should be for aid spending.”

I welcome rigour and thought in this area, although Lomborg’s past doesn’t inspire confidence for me. I also question his assertion that “statistics for the economic benefits of aid in some areas might be scarce”. It seems to me that vast amount of academic work have been done on cost-benefit analysis of aid.

The 10 challenges are listed here. Challenge papers authors are here. There are also going to be opponents, as yet unnamed.

I’d like to know, from people who know the academic scene far better than I, whether the nine experts — Jagdish Bhagwati, Robert Fogel, Bruno Frey, James Heckman, Justin Yifu Lin, Douglass North, Thomas Schelling, Vernon Smith and Nancy Stokey — are a balanced and sensible group. There certainly are some great eminences in that list, although some of their work seems very distant from the issues at hand.

I wasn’t surprised to hear UK trade and industry secretary Patricia Hewitt give a speech last week warning against playing politics with offshoring. An important part of her brief is to defend free trade.

But it was a sign of the radically different political climate in Britain compared with the US that TUC general secretary Brendan Barber is quoted in today’s Financial Times saying, “I think that [decisions to outsource jobs to India] are proper commercial judgments that in some circumstances have been made.”

Barber isn’t out on a limb. In an accompanying FT article (I defy anyone to find these pieces, incidentally, from the FT’s home page without undergoing terrible search contortions), Amicus general secretary Roger Lyons is careful to distance his union from the kind of protectionist sounds that are being heard in the US.

The FT is careful to point out that the benign climate for free trade rhetoric and action is partly because of the excellent employment picture in the UK, where unemployment is decidedly lower than the US for the first time in generations. But when did economic reality ever get in the way of a good political argument?

Bernard Haitink: “At 75, it’s hard to sing any more — your voice goes; or to play any more — your fingers are rheumatic. But the technique of conducting is not as subtle as that. It demands other things that apparently you can still do when you are older.”

The way to win

Here’s the winning theme, courtesy of Josh Marshall: “The Bush administration has been a for-the-moment and for-itself operation, burning through the resources of tomorrow and the hard-acquired inheritance of the past to service the political needs — its political needs — of the present.”

The Big Picture points out a cheering chart from Barron’s.

On the basis of a Zogby poll, Kerry has 226 solid votes and Bush 176. Twelve states with 136 votes are the battleground. Howard Gold explains, “Only four of the states that we list as ‘in play’ (Minnesota, Wisconsin, Oregon and Washington) were Blue states in 2000, when they delivered a majority for Vice-President Al Gore. The other eight states that are ‘in play’ now (including Florida, Ohio, Arizona and Missouri), with a treasure trove of 98 electoral votes, were part of Bush Country in 2000. That suggests the Democratic presidential candidate is holding his base of support better than the president is, allowing Senator Kerry to peel off a couple of the paler Red states from the president’s column.”

Further to my Haitian queries below, today’s Guardian does have a piece by Peter Hallward that reinforces Jeff Sach’s points.

What’s so odd to me is that the two news stories The Guardian runs on Haiti are absolutely uninformed by this analysis.

Remember this next time you read polling results

Jay Rosen: “Polls work because they are a leveler and abstracter of the public’s speech. They screen out way more than they allow through; but when news organizations become a sponsor and supporter of polls, they tend to stress the informational value and truth content of polling as a matter of course.

“Not so visible is everything wiped out and rendered mute by the basic methods of survey research. This happens not because the scripters are biased; but because they’re scripters, inevitably drawing big boxes for us to jump into, narrowing down the options when it comes to political choice, making as little room as possible for ambivalence, which does not measure well.”

The real story of Haiti

A handful of left-wing blogs (and also see Whiskey Bar) are trying to winkle out what’s really been happening in Haiti, but none of the conventional media I read seems interested in challenging the standard line promulgated by the US and (new-found friends) France.

An exception was Jeff Sach’s comment in yesterday’s Financial Times (subscribers only). I have a lot of respect for Jeff and I found his chronology utterly damning. Some excerpts from Sachs:

“Mr Aristide won the presidential election later that year [2000]. The US media now reports that those elections were ‘boycotted by the opposition,’ and hence not legitimate, but this is a cruel joke to those who know Haiti. In fact, Haiti’s voters elected Mr Aristide in late 2000 with an overwhelming mandate and the opposition, such as it was, ducked the elections. Duvalier thugs hardly constituted a winning ticket and as a result, they did not even try. Nor did they have to.”

“The ease with which another Latin American democracy crumbled is stunning. What, though, has been the role of US intelligence agencies among the anti-Aristide rebels? How much money went from US-funded institutions and government agencies to help the opposition. And why did the White House abandon the Caribbean compromise proposal it had endorsed just days before? These questions have not been asked.”

Better than from Number Ten

“Every day the Prime Minister’s Official Spokesman meets a small coterie of political journalists known as ‘the lobby’ for a topical chat, or ‘briefing’. We’ve built a site that lets you: read summaries of these briefings, add your own comments and find what other websites are saying about the issues discussed This website aims to short-circuit this game of political Chinese whispers. Every day we will publish what the Prime Minister’s Official Spokesman actually said in response to the lobby’s questioning, rather than what he was reported as saying.”

Their FAQ is entertaining and revealing.