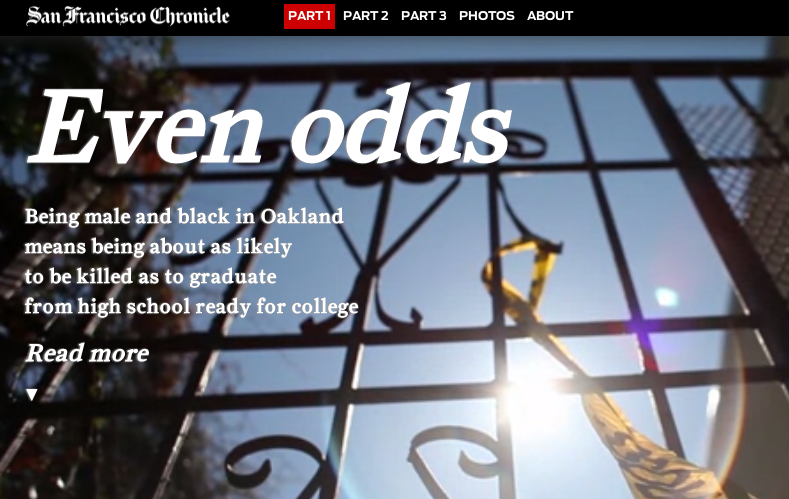 The startling headline above leads today’s San Francisco Chronicle. It stopped me in my tracks and I read the full part one by Jill Tucker. There’s excellent reporting and tragic detail about the violence that accompanies poverty and deprivation in way too much of Oakland’s black community.

But the primary assertion — even odds — is a terrible distortion.

You need to read well into the break to understand the statistics. And the Chronicle tied itself into knots to get to its “even odds” shock. Here’s how it breaks down.

From 2002-2012 802 black males graduated Oakland high schools “college-ready” — eligible to attend the University of California or California State University systems. In that same span, 787 black males of ALL ages were victims of homicide in Oakland.

But the statistical distortion is worse than just taking all ages and comparing it to the high school aged population. The Chronicle looks at one class in some detail.

In 2009, about 600 black males were entering freshman in Oakland public high schools. Between 80 and 100 of those 600 graduated “college-ready”. Another 200 got their high school diplomas, but without UC and CSU requirements completed. So 300 of the 600 graduated high school (although there’s no way of knowing whether those 300 all started in 2009).

In those same four years, according to the Chronicle, 31 Oakland public school students aged 11 to 19 were killed. “Most of them were shot and most were African American,” the story reports.

So even if you assume that all 31 of those killed were from the 2009 high school entrant group (which they’re not, of course), black males are 10 times more likely to graduate from high school than to be killed. Even on the “college-ready” standard, black males are three times more likely to graduate than be killed on that very broad assumption about the 31.

The Chronicle did not need to twist statistics to bring home the awful toll of gun violence in Oakland. Yesterday, buried in the inside pages of the local news section of the Chronicle, three more people were shot and killed in Oakland. That’s not an unusual Saturday. But in their attempt to really shock readers, the paper’s editors truly failed their responsibility for accuracy.